Hydrocarbon storage tanks are a critical component of many oil and gas production sites. In the absence of pipelines, storage tanks are the only way a company can collect their product before sending it to market. They range in volume from a few barrels to thousands of barrels, and with increased capacity comes increased size, sometimes making them inaccessible and unsafe to access.

What do we know about emissions from tanks?

Tank emissions have not been well understood until recently because we have historically estimated emissions using “emissions factors.” Emissions factors are developed over time and represent a reasonable average that a typical component emits and are multiplied by the number of total components to estimate emissions.

Recent studies suggest otherwise. One study from last year used small airplanes equipped with methane sensing technology and found that tanks were the single most significant source of emissions, making up one-third of all emissions that they identified.1

Why do tanks emit methane in the first place?

Hydrocarbon storage tanks are a source of methane emissions due to a phenomenon known as “flashing.” Flashing occurs when a produced oil mixture loses pressure or is heated, causing the liquids within the mixture to volatilize and turn into their gaseous form suddenly. As gases flash off inside the tanks, it causes a rise in pressure. Built-in pressure relief valves are an essential safety feature since they allow for this gas to be released, but they contribute to the high emissions from tanks. The other main component contributing to gas releases from tanks is thief hatches, which are sometimes left open. 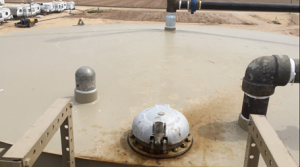 Photo showing Thief Hatch in the ‘close’ position on a tank

There’s good news! Emissions from pressure relief valves are known as vented emissions, meaning that they are released intentionally as a byproduct of their design. Vented emissions don’t require any expensive repairs, and they’re easy to find.

On the other hand, an open thief hatch would cause fugitive emissions, otherwise known as an unintentional leak. Fugitive emissions are not built into the tank’s design and have to be detected using some form of leak detection technology. Once they are found, fixing the leak can be as easy as closing the hatch.

Are tanks emitting more than they used to?

They’re not- now we have the technology to look for emissions from different vantage points. The most commonly used tools for searching for emissions are optical gas imaging cameras (OGIs), which are handheld devices used by skilled operators. In many cases, these operators can’t access the tops of tanks safely, so they will try to take readings from afar or use emissions factors to estimate leak rates.

Recently, a suite of newer technologies has emerged, which have enabled us to look at tanks from different angles, including from above, in ways that were never previously feasible. In short, the more we look for emissions, the more we find.

How can tank emissions be measured properly?

With the emergence of so many “alternative” leak detection technologies, many options exist for conducting safer and more accurate emissions monitoring for hydrocarbon storage tanks. These technologies come in various deployment options, including airplanes and helicopters, drones, vehicles, continuous measurement systems, and even satellites.

When deciding on the right technology to use for tank emission monitoring, an operator should consider the technologies’ sensitivity, vantage point, and mobility. With those considerations in mind, drones, aircraft, and continuous monitoring systems that are mounted high enough could all be viable options.

Since hydrocarbon storage tanks are responsible for such a large proportion of methane, it is important to design a site with this consideration in mind. Tank & oilfield equipment manufacturers are great at offering designs and technologies to help mitigate these emissions. Emission Rx Combustors, for example, can eliminate all the methane emitted from a tank and substantially reduce the CO2 equivalent.  Additionally, work practices should be implemented to ensure operators consistently close hatches after use. These strategies together can eliminate a significant portion of their fugitive emissions. Finally, conducting leak detection surveys on tanks using alternative technologies and quickly repairing the problems is the final piece of the puzzle that will help the industry meet its methane reduction targets.