Tank Venting Overview & Control Options – How To Measure/How To Mitigate

Above-ground storage tanks are one of the most common pieces of oilfield equipment. They are necessary for collecting and storing oil and other produced liquids. Hydrocarbon storage tanks can be found on their own at a well-site, or in a collection of tanks at a facility, known as a battery, and range in size from a few barrels to thousands of barrels.

Hydrocarbon storage tanks collect and store liquid-based petroleum products, which typically have dissolved gases. The gases can easily come out of suspension and release vapours into the atmosphere. This process is often referred to as “flashing” and is similar in theory to the release of gas when opening a can of carbonated beverage. A change in pressure causes the gases to flash out of suspension and vaporize. In the case of tanks, flashing is caused by the drop from a high-pressure environment such as a wellbore or a separator, to atmospheric pressure within the tank.

Tanks also experience “working losses”, which come from changing liquid levels within the tanks and from the mixing of tank contents when fresh products are added and circulated, and “standing losses”, which are from temperature changes.

When this natural gas flashes out of suspension, it may increase the pressure within the tank itself. For safety reasons, pressure relief valves (e.g. Thief Hatch) are installed to prevent over-pressurization of the tanks.

Whether an emission source coming from a tank is classified as a fugitive or vented emission depends on the emission source. The two main ways that tanks release methane are through the vent or thief hatches (Figure 1). Venting-related emissions are built into the design of the tanks and are an expected part of everyday operations, thus are considered vented emissions. Conversely, emissions that come from non-routine operation of the tank are considered fugitive emissions (i.e. piping leaks, emergency pressure relief valve (EPRV), thief hatch). Distinguishing vented from fugitive emissions is important since they are treated differently as per reporting requirements (i.e., AER Directive 60 reporting). 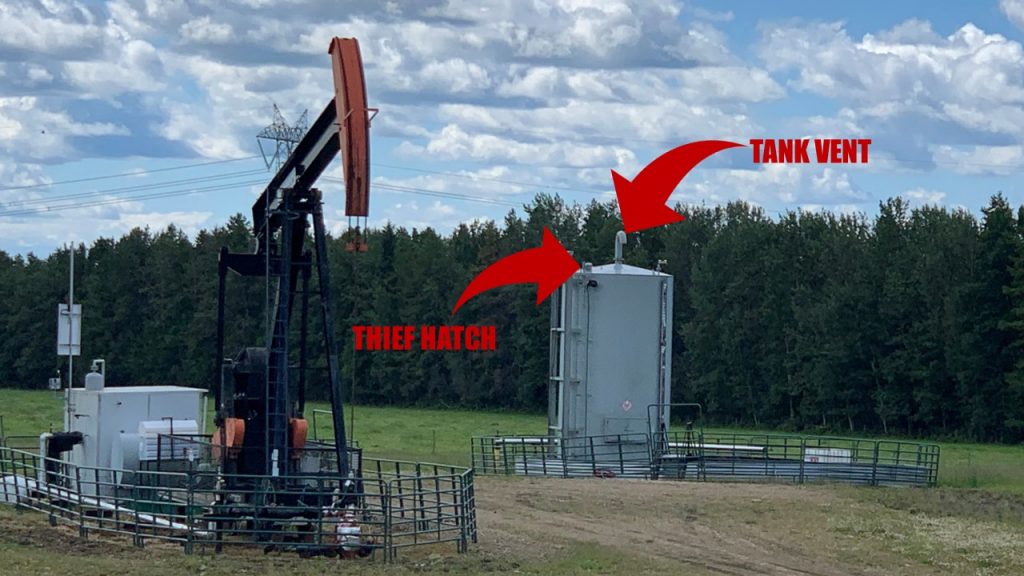 How much do tanks emit?

Tanks emit a lot. A recent study in Texas used aircraft-based methane detection technology and found that one-third of all emissions they detected came from tanks and tank batteries, making up the single biggest contributor.1 Another study in Alberta, using a different aircraft-based system, found similar results; tank venting was the single biggest source of emissions of all production infrastructure in the province.2 This same study found that hydrocarbon storage tanks in Alberta had an average emission rate of 52 kg of methane per day, roughly equalling 988 Mcf/year or over $7,900 CAD/year/tank in sellable gas (based on March 2022’s gas price of $6.32/Mcf).2,3

Measurement of emissions from tanks can be a challenge, due to their size and accessibility constraints. Historically, the most common method for detecting methane emissions was an optical gas imaging (OGI) camera, which is used on the ground by skilled operators. These operators do not typically climb onto the roofs of tanks in order to check the thief hatches and PRVs with their cameras, which can lead to major sources of methane being missed.

In recent years, there has been a wave of innovation in the methane measurement and detection space to address gaps left by OGI. A variety of aerial-based techniques are now seeing uptake by industry, including planes, helicopters and drones equipped with methane sensors. The higher vantage point has made tank emission detection easier and safer and has made us aware of more methane being emitted than was previously believed (Figure 2). 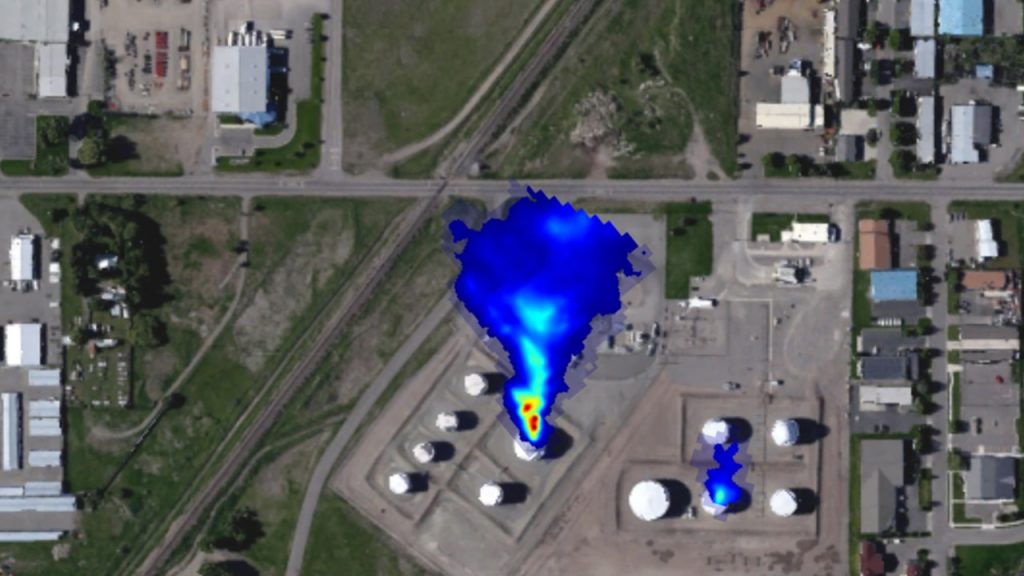 Increasing awareness of the true scale of tank emissions is a good thing, as it allows the industry to take action to mitigate it. In the case of a thief hatch left open, the fix is simple; close it and make sure it is always closed after use.

Emissions caused by venting are more challenging to mitigate, as they can’t be fixed by a simple repair. One of the most popular choices for managing vented gas is to hook up the tank to a vapour recovery unit, which collects and compresses this gas and redirects it.  Remember that natural gas vapours are valuable. The gas collected from a VRU could be rerouted into an onsite gathering line, an onsite compressor, or even used for fuel gas on the site itself.

If the gas can’t be used in one of these ways, it can be destroyed in an enclosed combustor or incinerator. For a reminder of some of the ways gas can be utilized on a site, click here .

With thousands of tanks emitting gas, many producers are taking steps to mitigate these emissions. EnviroVault & Emission Rx have been provided clean-burning Enclosed Combustors to producers to help manage emissions and improve their GHG impact.